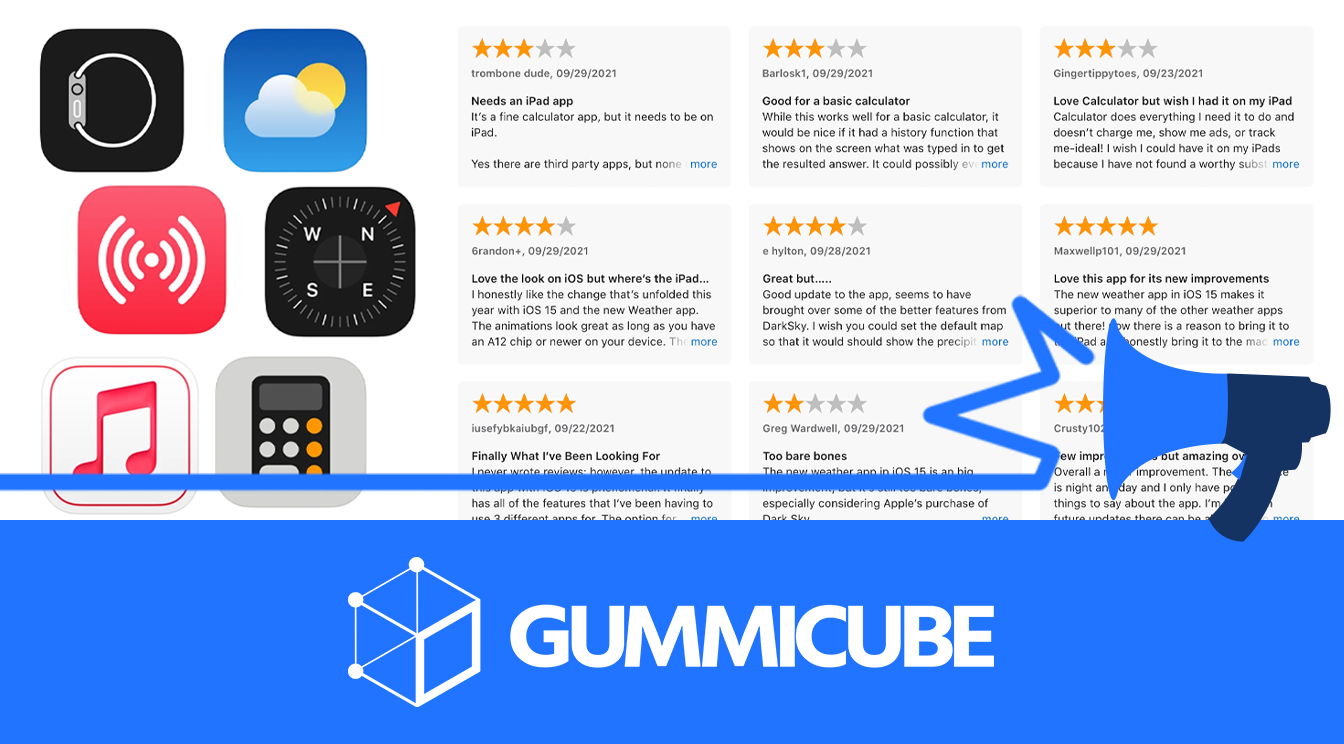 Users finally have the chance to let Apple know how they feel about the default apps that come preloaded on iPhones and iPads. Among the big changes with iOS 15, Apple quietly announced that users can rate and review built-in iOS apps in the App Store just like they have been able to for third-party apps.

Thus far it is not looking great for Apple’s stock apps. Most of the feedback received since this option became available has been fairly negative. Of course, this should be taken with a grain of salt at first, as there are fewer than 500 reviews on most apps. Hopefully Apple will take some of this feedback into consideration, though, and consider improving the user experience for these built-in applications. 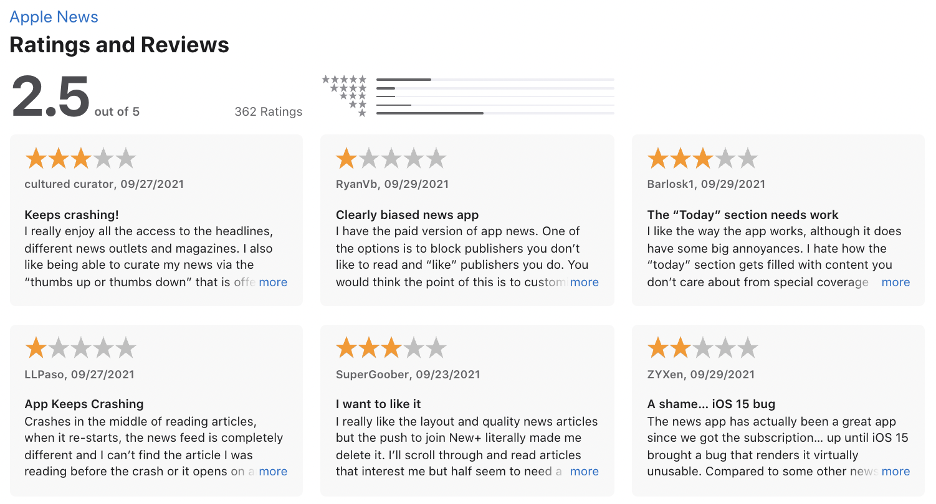 Much of the recent litigation against Apple concerns the way they allegedly treat their own apps differently than those created by third parties. This has created an environment where it seems that Apple is “untouchable” and does not need to follow its own rules. While it was not explicitly stated, there is reason to believe that this move by Apple was influenced by these numerous antitrust allegations. At the very least it does seem to be a reaction to ongoing public sentiment to take measures that somewhat level the playing field in the iOS App Store.

Since the App Store came into being, users could rate and review apps. This has always been a helpful tool, allowing developers to receive feedback and providing insight for other users who may be considering installing. For a long time, Apple’s own apps have not been held to these same standards. Apple has historically restricted users from being able to provide feedback or criticism on default apps, and it was only with iOS 14 that users could delete some of these built-in apps from their home screen.

Apple’s default apps are regularly criticized by users who are unsatisfied with the experience provided. Even the recent verdict on the now infamous Epic Games v. Apple brought this point to light. Judge Yvonne Gonzalez Rogers mentioned that “a third-party app store could put pressure on Apple to innovate by providing features that Apple has neglected.” Hopefully, critical reviews can spur Apple to start investing in their stock apps to improve user experience and satisfaction. 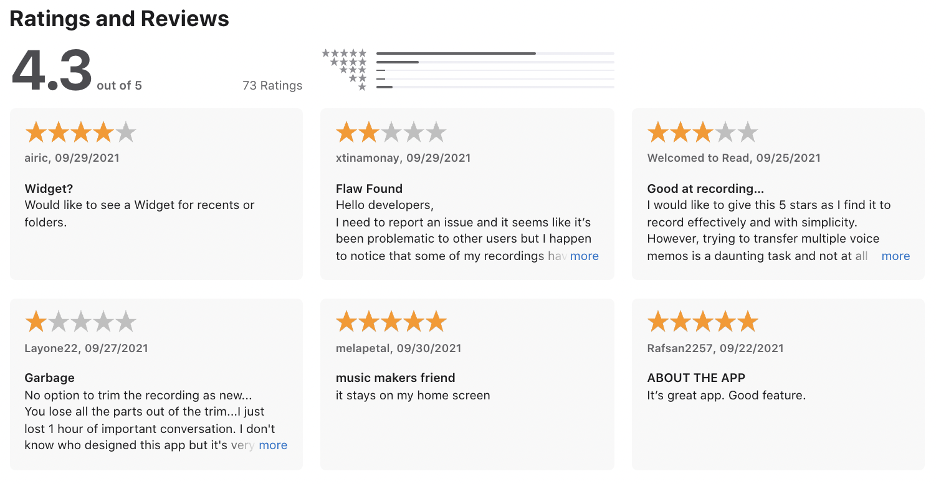 Since the new policy of allowing default apps to be rated went into effect, most of Apple’s apps have received less than glowing reviews. Currently, the highest rated Apple app is Voice Memos which is sitting at 4.3 stars, though even within positive reviews there are suggestions on improving user experience.

Most of Apple’s other apps seem to be hovering around or below three stars. Apple Maps is at 3.5 stars, with users primarily noting how much easier Google Maps is to use. Apple News is at 2.5 stars, with the biggest complaints being operability issues where the app crashes often. The app that has had the most negative reception overall is Apple Podcasts, which is at a 1.8 star rating. 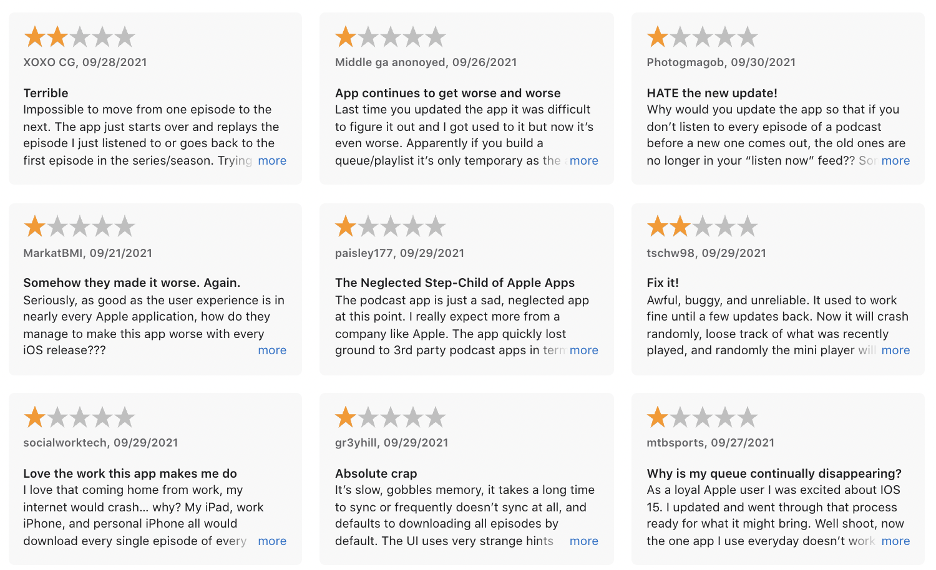 It is likely that ratings will stabilize once more users get over the initial torrent of criticism that had been building up for years, and more recent users take the time to leave feedback. Reviews may move towards more constructive ways to improve the app, and Apple will have a chance to evaluate and take action on fixing issues that leave users making comments like calling the Podcasts app “The Neglected Step-Child of Apple Apps”.

Fortunately, since Apple now appears to be following the guidelines of the other apps on its platform, it can opt to wipe its historical rating score after an update. It’s possible that Apple will take the actionable user feedback in mind, make improvements to the apps, and re-launch with these issues addressed. The pent-up harsh reviews will remain, but its rating score can more accurately reflect the improved app rather than a decade of built-up frustration that was previously relegated to online forums and social media.

Apple has opened the door to allow users to rate and review pre-installed Apple apps. Whether this decision was influenced by the recent legal proceedings that have Apple in hot water over antitrust allegations has not been confirmed. Regardless, this move does take a step to leveling the playing field in the iOS App Store.

It is good to see Apple willingly open their ecosystem up to constructive criticism. While the reviews are overwhelmingly negative at the moment, it is possible that as we move forward with this new policy, we will see ratings stabilize. Hopefully Apple uses this opportunity to improve upon their software products, thus fostering a more positive user experience.

In a direct way, the move can help give Apple the information it needs to improve its built-in apps for future updates, leading to more adoption of its native apps like Apple Maps over competitors like Google. In the bigger picture, it helps clean up Apple’s public perception of handing out Resolution Center judgements from high atop its ivory loop, which may be helpful in its ongoing court battles. 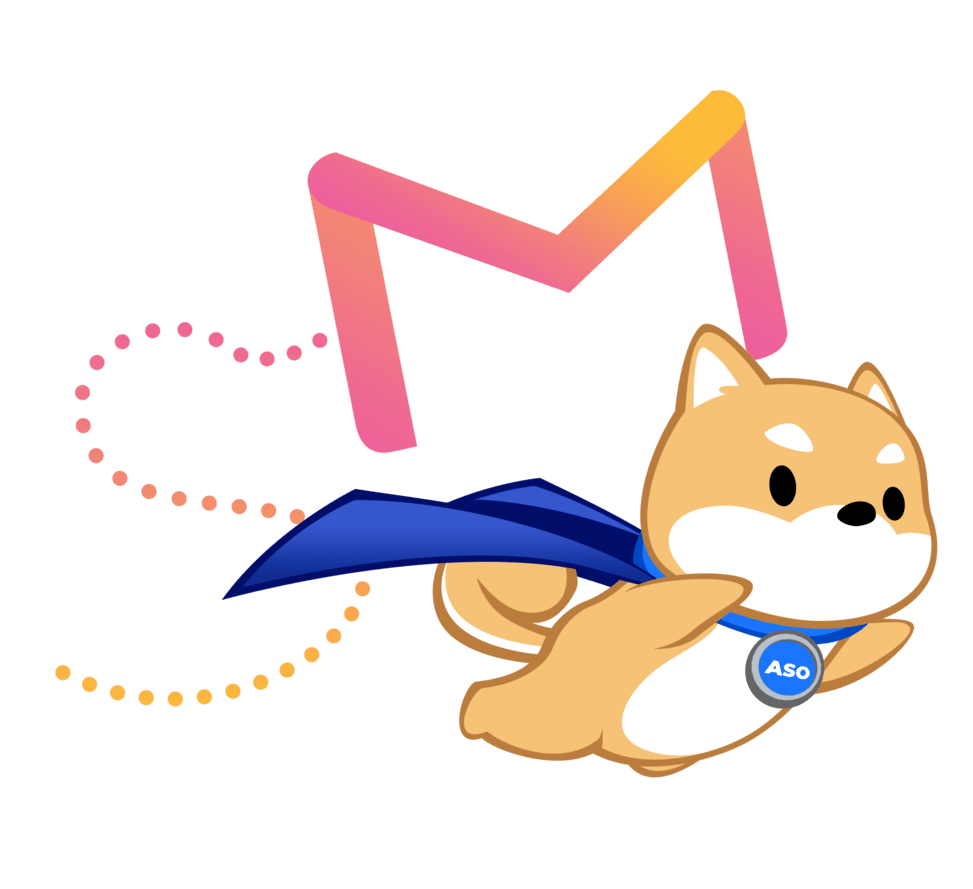